Home / Blog / Which Truck Parts Are Mostly Likely to Fail, Leading to a Crash? 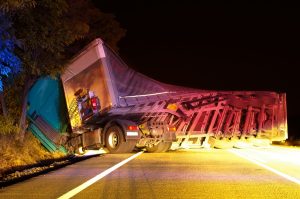 Think about driving alongside an 18-wheeler truck carrying heavy cargo. Now, picture one of the truck’s tires blowing out and the truck driver losing control of the vehicle without any warning. All that cargo is released, with everything spread out along the interstate. Vehicles all around you, including yours, are susceptible to serious collisions. Although this is just an imaginary scenario, you might be surprised to hear how often these types of trucking accidents occur on roadways.

Today, we want to review which truck parts are mostly like to fail and lead to a collision, and to address who could be liable in such a situation.

Defective and poorly maintained tires can lead to deadly crashes

Tires are a leading cause of truck accidents. In fact, of the 5,005 fatal truck accidents involving large trucks in 2019, 612 fatalities were related to tires. Serious problems like under-inflated tires, wear and tear, cracks or cuts, and improperly maintained tires present issues for anyone with a commercial driver’s license (CDL). Damaged tires can blow out, causing the trucker to lose control and swerve into another lane. The tire pieces themselves can also pose a risk if they roll into the middle of the road, or if the pieces bounce and hit another vehicle.

Defective tires also pose risks. Treads can separate and tires can wear unevenly, increasing the chance of a blowout. If the tire fails because it is defective, the manufacturer may be liable for damages in a lawsuit.

A hydraulic power system involves a sump, motor, pump, valves, actuators, and hydraulic fluid. This system is used to transfer power and reduce mechanical complexity. The cost to replace or repair this system can get very expensive – especially for independent operators and smaller companies – but failure to maintain the parts can be deadly. A truck that simply stops moving on a highway can cause a multi-vehicle crash.

The risks associated with hydraulic failure are so severe it actually prompted a recent recall by Daimler Trucks North America. Daimler recalled 122,056 Freightliner and Western Star Trucks due to the possibility of a break in the battery terminal cable. A loss of electrical power and an engine stall is imminent should the battery terminal cable break. Daimler suspected that debris may have been allowed to enter the system as a result of improper sealing of aluminum and brass. Improperly sealing materials together could have resulted in an engine shut down for thousands of drivers.

How common are “bad” brakes?

In July, the National Highway Traffic Safety Administration (NHTSA) opened an investigation into half a million trucks with Haldex Gold Seal brake chambers, because there was a risk of the trucks catching fire. As you can see, a defective brake system has the potential for life-threatening failures.

Failing, malfunctioning, and/or defective brakes mean a truck needs an even longer stopping distance. Brake failures increase the risk of rear-end crashes and even rollovers. This is why brake systems must be regularly and routinely inspected, so that problems can be identified and fixed before the truck goes back out on the road.

Defective and malfunctioning steering can send trucks careening out of control

Power steering is a hydraulic system, too. Pumps can leak fluid when hoses wear out, and any contaminants introduced to the fluid can affect the system itself. The good news about power steering in tractor-trailers, however, is that problems can be noisy; a driver or maintenance crew should have an audio cue when the fluid is low. They will certainly feel the difference when they try to turn or park.

Who is liable for a truck accident caused by damaged parts?

When a faulty or defective part is the cause of a truck accident, the manufacturer can be held liable. When the truck wreck was caused by a worn-down or broken part, however, the trucking company itself could be liable. So, too, could the driver, the fleet inspectors, and the mechanics, or even the local government in charge of maintaining roads (if road conditions contributed to the wreck, that is). For example, if a truck driver hears the tell-tale sound of low power steering fluid yet does not nothing to address the issue, that is an act of negligence.

If you were injured in a truck accident caused by a damaged or defective part, you do not have to go through it alone. The Charlotte truck accident attorneys at Warren & Kallianos, PLLC have decades of experience successfully representing victims of truck crashes throughout North Carolina. Call our office at 704-377-7777 or complete our contact form to schedule a free consultation today.