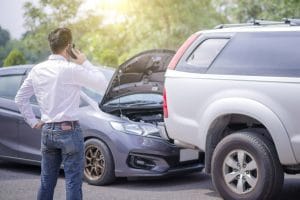 Car accidents can be traumatic, even when someone doesn’t suffer permanent injuries. In order to be successful in your claim for damages, you need to determine liability: who is accountable for the crash. But what can you do when you say “A,” and the other driver says “B”?

When you have been hurt and the other driver denies fault, you may end up having to go to trial. This is how our Charlotte car accident lawyers may build a case to prove you deserve compensation, and that the other driver was at fault for the wreck and your injuries.

One way to tell who caused the accident is by looking at video footage. This could include traffic cameras, security cameras from local buildings near the site of the accident, or recordings from a device by a third party witness.

Pictures also play an important role. Photographs of the damage to the vehicles involved, of any bodily injuries you or any passengers may have sustained, and of the road itself can all prove useful.

There can be a lot of information gleaned from the scene of the accident. Using tire marks, investigators are able to discern the speed of a car prior to a collision based on their length and the force and friction the tires had while skidding. Investigators also look at the damage done to other structures in the area. If a car hits the median on a highway trying to swerve and avoid a collision, damage done to the median will be telling. Also, gouge marks on the roadway can help establish in which lane the collision occurred.

A common cause of motor vehicle accidents is cell phone usage while driving. Texting while driving is illegal by drivers in North Carolina, and drivers under the age of 18 are prohibited from using a cell phone. Cell phones record the time stamps calls and texts as well as the length of calls. One can be at fault if they were using their phone illegally at the time of the accident.

Important information comes from the vehicle itself, including whether all parts were working correctly. Cars come with sensors that monitor the engine functions and record any malfunctions that may have caused the collision. Commercial vehicles are equipped with a “black box” that houses data about the activity of the truck and the driver that could be pertinent to the case. GPS systems can be examined for any misinformation that may have caused the collision as well. We may also request the logs of any apps on the other driver’s phone which would have recorded speed, such as a safe driver app, or phone usage, like Snap Chat.

Damage outside and inside the car

Documenting damage to all vehicles can be crucial as determining fault. Take pictures of the damage done to your car and to the other car involved. Images help the investigators discern areas of impact on each vehicle and which caused the collision.

Building an accident case is not easy. A Charlotte car accident lawyer has the experience needed to build a case so you can focus on recovering from your injuries. The team from Warren & Kallianos, PLLC is here to handle your case from start to finish. Call our office at 704-377-7777 or complete a contact form on our website to schedule a consultation.