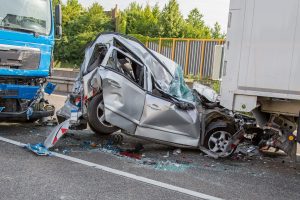 If the vehicle you are driving is rear-ended by the driver of a commercial vehicle and you sustain injuries, you may have the right to file a claim against the driver and the company that employs the driver. In this capacity, the commercial driver is driving the vehicle under the authority of his or her company. As a result, some or all of the responsibility for the accident and your injuries may lay with the employer.

About 1.7 million rear-end crashes occur in the United States every year. As the injury victim in one of these crashes caused by a commercial vehicle driver, you most likely have the right to pursue financial compensation for your losses in a claim or lawsuit.

Commercial vehicle drivers are often pressed for time because of a tight delivery schedule. Drivers are often encouraged to drive as many hours as possible, even though this can result in hazardous driving in the form of fatigued driving. Some commercial vehicle drivers are given additional compensation for arriving at their destinations ahead of schedule. Potentially, this can lead to driving at higher speeds or working longer hours – both potential causes of accidents.

Some of the most common reasons for rear-end crashes caused by drivers of commercial vehicles include:

Other causes can include faulty brakes and poor weather conditions that cause slippery road surfaces.

Pursuing compensation for damages in a truck accident claim

Whether you end up filing a claim for compensation against the commercial driver or the company employing the driver, or both, you may be able to recover significant compensation if you and your attorney can sufficiently prove your claim.

At Warren & Kallianos, PLLC, our Charlotte truck accident attorneys can investigate the incident and put together a case that helps you pursue any and all compensation you deserve for your injuries. To arrange a free consultation, give us a call today at 704.377.7777 or drop us a message through our contact form.