Home / Blog / The Deadly Nature of Frontal and Head-on Collisions 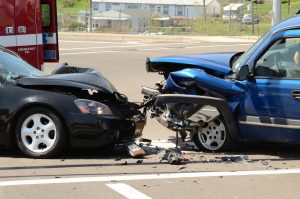 If you have been involved in a car crash, you may have undergone an upsetting experience to say the least, regardless of the nature of your injuries. However, often the injuries sustained in these crashes are quite serious, especially with front-end collisions. These are some of the most dangerous car crashes. This type of crash occurs when the front portion of a vehicle collides with the front portion of another vehicle or with an object such as a telephone pole or tree.

The most common type of car accident that results in fatalities is the frontal car crash, according to the Insurance Institute for Highway Safety (IIHS), the top agency in the U.S. that performs crash tests.

What constitutes a head-on collision?

Various scenarios are possible with front-end collisions. In most cases, these car crashes happen with one vehicle is approaching another vehicle on the same side of the road. Usually, one driver enters the other driver’s lane, resulting in a head-to-head crash. This scenario is described by the National Highway Traffic Safety Administration (NHTSA) in one of its test scenarios when one driver drifts into the other driver’s lane on a two-lane road after falling asleep at the wheel.

When two vehicles collide head-to-head, the combined momentum and weight of the vehicles elevates the force of the crash, which can result in serious injuries and even death to drivers and passengers. Since these crashes can so easily deform vehicle structures, including interior components, mechanical parts, and reinforcing structurers, it is no wonder the serious damage they can inflict on the human body.

In a head-on collision, the exterior of the vehicles involved may be  forced into the interior of the passenger compartment, causing potentially serious injuries to the lower extremities of drivers and passengers, including the legs, knees, ankles, and feet. The occupants of a vehicle of significantly less weight, mass, and size than the other vehicle in a head-on collision are at greater risk to sustain catastrophic or fatal injuries.

Although vehicles are made safer in many ways than in the past, with various safety features such as airbags, seatbelts, and more, vehicle occupants in head-on collisions remain at high risk of sustaining serious or fatal injuries.

Chances of surviving a head-on collision

An Indiana University Study discovered that the survival rates of occupants in vehicles with higher mass (i.e. light trucks, SUVs) or newer vehicles were higher.

At Warren & Kallianos, PLLC, we represent families whose loved ones have died in head-on collisions, and individuals who have been injured in car accidents of all kinds. To setup up a free consultation about your case, give us a call today at 704.377.7777 or fill out our contact form and send us a message.