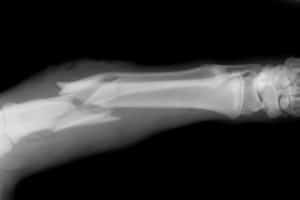 It is bad enough that car crashes, slips and falls, and other accidents can cause broken bones, which can take months to heal and may never fully heal properly. A new study of patients in Denmark now shows that  hip and other types of bone fractures increase the risk of mortality for people 50 years of age and older.

Reuters Health reported the study is a follow-up to previous studies on bone fractures and mortality risk. Prior studies showed that when seniors break a hip or a vertebra, there are short-term dangers that they may develop pneumonia or complications during their recovery.

The new study, which was reported in the Journal of Clinical Endocrinology & Metabolism, showed that people 50 years of age and older have up to a 25% risk of death for hip, vertebra, and other types of fractures. The risk of death for hip fractures was somewhat higher for at least 10 years.

Jacqueline Center, the author of the study, said, “For older people who break a bone, the risk of death goes up – and that risk can stay high for years. This is true for most fracture sites, including the upper arm, spine, rib, pelvis, and hip.” Ms. Center works for the Garvan Institute of Medical Research and the University of New South Wales in Sydney, Australia.

The Denmark study of broken bones and morbidity

Although Ms. Center is based in Australia, the study analyzed data from the Danish national registry that has monitored patient care for all of Denmark’s residents for many decades. The study analyzed 21,000 women and almost 9,500 men who were 50 years and older AND who fractured a bone in 2001. Their health was followed over the next 10 years, and compared to adults in the same group who did not have bone fractures. During the follow-up study, 10,668 women died and 4,745 men died. This set of data was then compared to the average death rates for similarly-aged people who did not have a bone fracture.

The study also showed that:

Ms. Center stated that researchers were aware that hip fractures could be deadly – but the researchers hadn’t studied other bones in the body and hadn’t studied the long-term effects of hip fractures. The risk of death is highest during the first year after the bone is broken. She added that the study highlights the importance of early intervention following any “low-trauma fracture.”

Ms. Center said the study did not disclose the reasons behind the increased risk, but stated heart disease and diabetes were shown to be factors in another study. She speculated that “there may be an interaction between the fracture event and other illnesses but that has not yet been proven.”

At Warren & Kallianos, PLLC, our experienced Charlotte, NC personal injury lawyers work with your physicians to fully assess the short-term and long-term medical treatments and risks for any injury, including broken bones. We file wrongful death claims on behalf of the families of loved ones who are killed due to a tragic accident. We fight aggressively to hold the responsible parties liable for all the damages they cause. Call us at our Charlotte, North Carolina office by phoning 704-377-7777, or by filling our contact form to schedule an appointment.